MADE IN HONG KONG 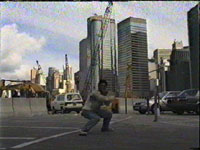 The documentary MADE IN HONG KONG allows glimpses on a Hong Kong shortly before the 1997 handover to China. But rather than focusing on the expected hysteria, Luc Schaedler's documentary debut works toward complexity by allowing six very diverse residents - Peter (British colonial civil servant), Nicole (Southafrican journalist), Eric Lye (Chinese architect), Guo (Chinese musician), Afzal (Pakistani actor) and Mohan (Indian businessman) - to talk about their relationship to the colonial city. Their life stories - offering different aspects of migration - mix with the pictures of the director's video camera, that captures the beauty in the architectural chaos of the cityscape, peeks into homes of illegal immigrants and explores the wares and bustling activity of the markets, offering us an understanding we are usually denied of the city. Though formally deceptively simple, as the director intercuts the interviews, with frightening TV advertisements and quietly stunning footage of daily life, the documentary develops into a poignant and very personal portrait of Hong Kong. The deeper we get into the city the more we learn about Hong Kong's ambiguities and its political and social problems: the density, the architectural chaos, the booming economy and the uncertainity regarding 1997.

'A refreshing and original documentary from newcomer Luc Schaedler.'
The Vancouver Sun